The Akha originally settled in the Kuaichao and Yunan, which are today provinces of China. After moving down to the Southern part of Yunan, they later moved to Va and Xiengtung districts of Burma, and then to Lai Chao district of Vietnam. Only later did they settle in the mountainous areas in northern Laos during the last 200 years. Escape from war and the need for land for cultivation were the main reasons of these migrations. The Akha have found Myanmar, Thailand, Laos and Vietnam as the most peaceful and agricultural-suited places to live in. The natural richness and mild weather throughout the year are other factors that attracted them to settle in those areas. Currently, most of the Akha are living in the Northern part of Laos, mainly in Phongsali, Luangnamtha, Udomsai, and Bokeo province. Akha are also living in Thailand, Myanmar, China, and Vietnam. The total population of the Akha in Kaos is 66,108 people, where 33,000 are women. This is 1.4 percent of Laos’ total population based on the second population census 1995. Although there is no written history about the Akha, they have a rich oral history of their traditions and culture. It is a summary of thoughts and true life experiences which are inherited from their ancestors. This is called the “Akhazang”, or the “Akha way”.

The Akha heavily believe in spirits and it is not easy for them to give up this tradition, as their belief in spirits is strongly ingrained in their culture. They believe spirits are both “good” and “bad”. House and village spirits are believed to be “good” as they represent spirits of their ancestors who look after their family members. Trees, forests and rivers spirits are considered bad spirits. The bad ghosts may cause them sickness and illness. Based on these beliefs, the Akha will pray, both to the good and bad spirits to look after them or save them from evil happenings. Also, Akha also express their respects by yukham or kalum”. Yukham is when a woman who has just given birth must stay by a lit fire. Kalum is the temporary prohibition from eating or doing some things that are usually considered a routine activity. It is important to not break these traditional rules or insult the house and village spirits. Women must stop working during their Yukam even if the activity is considered very important for their daily living.

In the past, the Akha strictly obeyed their traditional rules and prohibitions. Some of these that were followed at certain times are: • Do not touch any items or articles in the village gate area.
• Do not take off shirts and shoes. Do not bring raw meat into the village.
• Do not sing and dance. Conversation between boys and girls was also not allowed.
• Pregnant woman that were not married were not allowed to give birth in the village.
• Do not allow pigs to give birth in the village, and if only one or two baby pigs were born, they must not be allowed to breed in the future. They must be killed or offered as food to others.
• Twin or abnormal babies would be killed.
• Widow or divorced women were not allowed to die in the village. If they did die in a village, the deceased’s family had to move and resettle in another place.

There are other rules and taboos that had to be obeyed and were enforced daily in the past. However today some of these have fallen out of favor and are no longer practiced. Akha follow a paternal family line. After marriage, a man must bring his wife to live in a small house built next to the main house of his parents. The son or daughter-in-law will be allowed to move in the main house when only the husband’s father or mother passes away. However, the new couple can have a normal daily routine, such as eating together with the husband’s parents. If the son desires to build a new house the house must be in the area next to his parents’ house.

It is considered a great happiness if a wife becomes pregnant, therefore during the pregnancy the husband and wife should not break any rules for the sake of the mother and child’s health. When giving birth, only the husband’s mother assists in the birth. After the birth, two chickens are sacrificed to the spirits. Akha believe that death is a transformation from the human world to another spiritual would of their ancestors. Therefore, before burying the body, there are many performances that are carried out so the deceased spirit will not be harmful for them and will also support their children’s future. The body is washed and pieces of silver are put in the mouth. Death rites and chants will last for two days. The body is placed in an elaborate coffin and buried. They next day the family visits the gravesite, but will never visit again. The following year a ceremony is held where the family asks the soul of the deceased to return to the household and watch over the family.

The Akha family system is an expanded system. In Akha society, men usually are the most important figure in house and village. In a village, there will be a leader versed in belief and tradition, who acts a headman. The main activities of this headman are looking after the important and respected things in the village, such as the village gate, swing, water source, cemetery, and spirit place. This leader will also be the first person to be informed if unpleasant things happen so together with elderly people in the village, he will solve the problem as soon as possible. Also, there is a leader of the youth in the village. His main duty is to recommend activities for young people including the welcoming of outside guests. For Akha, there are many performances and major celebrations in a year, such as the celebration of the swing in August to September, New Year celebration in January to February, and celebration related to agricultural production. The Akha will pray to guardian spirits of the water source before rice plantation, asking them to scare away insects and grasshoppers.

Akha traditionally practiced a primitive form of slash-and-burn agriculture that would leave the soil exhausted after three or four growing seasons. Their three main crops are dry-land rice, maize, and cotton. They would also grow vegetables, peanuts, spices, and sometimes tea. However, one crop the Akha have grown for a long time is opium poppies, which have led to problems, including addiction to opium. The Akha are also skilled foragers at finding many wild fruits and vegetables. They are skilled hunters, using traps, crossbows and old muskets to hunt large and small game. They also breed cows, buffalos, pigs, and chickens. However, it is unpopular to eat those animals as daily food, unless there are special traditional celebrations or occasions there are guests. 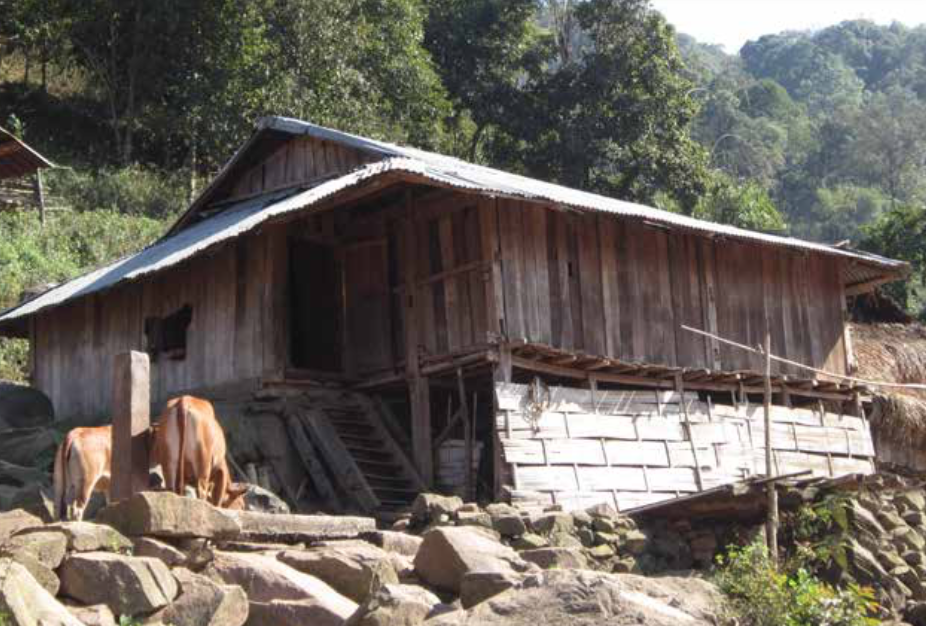 The Akha choose a site for a new village by using an egg as a test. The main shaman drops an egg in a small, freshly dug hole, and if it breaks, this means that the spirits of the land have accepted the villagers to construct a village. The shaman will build his house on the spot where the egg was dropped. The villages sit in altitudes from 600 to 1000 meters, and are usually on a hillside in some cleared forestland. An average village has between forty and fifty houses. The Akha have two styles of house One style is to build on stilts, so the house is about one meter above the ground. The other style is to build the house on the ground. Floors are bamboo mats, wood planks, or hard earth, depending on the style of the house. Walls are made of woven bamboo and the roof is heavy thatch. Akha houses have no windows, but are well protected from wind, rain, and cold weather. Houses always have two doors, one at the front and one in the back. A wall that divides the house into areas for men, and areas for women separates the houses. Akha villages are recognizable by the large wooden swings that are used during festivals and celebrations. There are also two important gates called “the law ka” Spirits that protect the village inhabits these gates. Akha women have perhaps the most colorful and interesting costume of the entire minority group in Laos. There are many different styles of dress, but a common style is as follows. Elaborate headdresses are worn that are made of a series of bamboo rings covered with straw. This is covered with silver balls and silver coins, with colored threads at the sides. Colorful short skirts are worn with tight-fitting jackets. The skirts are often dark blue or black, and the legs are covered with leggings that go from the knee to the ankle. This is a rough description of the dress, as it can very among the different Akha groups. The men tend to wear more modern clothing; however, some still wear the traditional blue loose-fitting trousers and blue jackets. A white vest is often worn under the jacket. The Akha make all of their traditional clothing. The women spin cotton or hemp to make cloth. Then they embroider the cloth with naturally died threads and yarns.


The Akha call themselves “Akha” while other ethnic groups call them “Kor or Ikor”, However, the preferable name and also the official name is “Akha Ethnic Group” There are many sub-group of Akha, namely Chichor, Pouly, Pana, Fe, Ooma, Nukui, Luma, Eupa, Chipia, Mochi, Yaeu, Kher, Mutem, Mamouang, Poukuang, Pilou, Pisor, Pousang and Kongsaad. The Akha landguage is in the China-Tibetan group of languages and is placed on the branch of the Tibetan-Myanmar languages. Akha has no written alphabet.