The Hmong are an ethnic group that has lived in the territory of Laos since the middle of then nineteenth century. This ethnic group migrated from the Tibetan region, passing through China and settling in the lower part of Maenam Leuang (Huang Ho or Yellow River). Due to war, they migrated and moved further down China, entering Vietnam, Laos, and Thailand. Presently, the Hmong live in numerous areas of the northern provinces of Laos all the way down to Bolikhamsay province. Additionally, the Hmong still live in China, Vietnam and Thailand. The Hmong in Laos have a total population of 315,465 persons, of which 157,410 are females, sharing 6.9% of the country’s total population according to the second population census done in 1995. The Hmong practice a mix of animism, naturalism and spirituality. Hmong believe in animistic spirits (phii) such as the spirits of their dead parents, the spirits of the household, spirits of the village and the region. There are also spirits of the sky, the forest, rivers, and many others. The largest grout of spirits is called the dab, and this includes the above-mentioned spirits. Occasionally, these spirits will cause problems and have to be exorcised by a village shaman. The spirit of the household is worshipped by placing offerings such as food on a small shelf in the house. If a visitor approaches the house, he or she must always ask permission first before entering. If the visitor enters without permission, then the household spirit may be offended, causing ill will in the household. The Hmong also believe that the ancestral spirits of the male line of the family live inside the pillars of the house. This is also another reason why care must be taken when entering another house. Hmong also believe strongly in witches, and that these witches can cast evil spells, such as turning one onto a werewolf. Shamans who deal with these problems are general male, but there are some female shamans.

Hmong follow the clan (takoon) system of lineage, which is traced and followed through the male line. This system of clan lineage prohibits marriage between members of the same line. They can only marry members of another clan. After marriage, the wife will stay at her husband’s house. She must follow her new family’s beliefs and lineage, but of course she still has relations with her own family. Hmong girls generally marry at the young age of fourteen to fifteen, and boys at around age eighteen to nineteen.

Major traditional festival of the Hmong people are the Boon Kin Chiang or Nor Peh Chao (New Year Festival) which is celebrated after the crop harvest, mainly on the fifteenth day of the first month of every year. This is a time of great celebration ad feasting. This is also an important time for courting between young people. Pregnant mothers give birth near the fire place of the house, with the assistance of an experienced woman to help and take care of her. After birth, the placenta of the newborn is buried under the floor of the house. A daughter, whether having a husband or not, is not allowed to give birth in her parents’ house. Hmong women will prepare for death by weaving the funeral cloths that they will be buried in. The dead are buried during sunsets in nice locations on mountainsides. The Hmong believe that a person has three souls that separate during death. Once soul goes to heaven, the other remains in the grave and the final soul in reincarnated. The Hmong spend time on farewells to the dead, for they believe that if they don’t evil spirits may mislead them on their way to heaven. The Hmong practice mainly slash-and-burn cultivation of rice and maize. Traditionally, they would use the land for three years, and then abandon it for twelve years to let the land regain fertility, but this is not always possible now due to population pressures. In addition, they grow vegetables and different types of root crops for the household daily consumption. They are very skilled at animal husbandry, raising many types of animals such as cattle, buffaloes, horse, goat, pigs, dogs and chickens. Their favorite animals are the small pot-bellied pigs.

Handicrafts are very important in Hmong society. Hmong men are skillful in carpentry and blacksmithing, making a variety of tools and utensils from both wood and iron. Silversmith skills are also common to produce the myriad of jewelry that the Hmong love to wear. Women are skillful at knitting and embroidery of different styles and patterns. They are well known for the elaborate and ornate embroidery and batik patters. 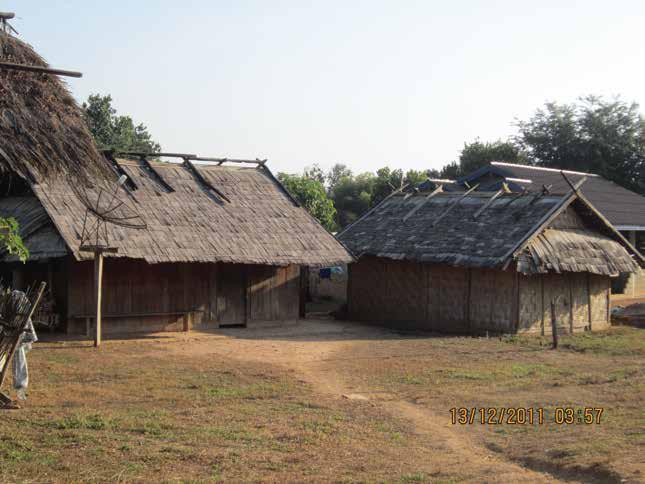 Most Hmong villages are between 1000 and 1500 meters high and many villages can only be reached by foot or horseback. Most villages never have more than fifty houses. Some villages are made up of a single clan. The Hmong house is rectangular and is built on the ground, not on stilts like many other groups. It is made of wood, bamboo, and has thatched roof. There is a fireplace in the corner for cooking and heating, and one end of the house is partitioned off for sleeping quarters for the entire family.

Costumes very among the different Hmong groups, but they are varied and ornate. Among woman, these can be black, loose trousers or pleated skirts with batik patterns and motifs of green, yellow and red embroidery. Long sleeve jackets with narrow collars and curved edges are also worn. Some Hmong also wear a black kerchief that is decorated with silver coins. Both men and women wear a great deal of jewelry of solid silver. These are rings, bracelets, necklaces, and earrings.


Hmong refer to themselves “Hmong”. For those Hmong living in Laos, referring to them as “Hmong” is satisfactory, as this is their ancient name also. In their language, “Hmong” means “person”. The Hmong in Laos are composed of many branches such as the Hmong Khao (White Hmong), Hmong Lai (Striped Hmong) and Hmong Dum (Black Hmong). The Hmong language is of the Miao-Yao group of the Austro-Thai Language family. The language branch is the Miao. They have tow alphabets, one using Latin Characters. The Hmong language varies slightly from one location to another, but all Hmong can understand one another.